Four Months in the U.S. Part I

At the beginning of 2018, my thoughts of going abroad thrived after we were given opportunities to take part in exchange programs from all over the world. I believe I’ve always wanted to visit the U.S., whether because of its advancing technologies or its diversity in people. I was only able to choose the University of Utah so that I could finally end up in America. It turned out to be not so bad, after all. Besides, I really would like a change of mind and some air far away from the heavy school work of my home university. So I decided to go. 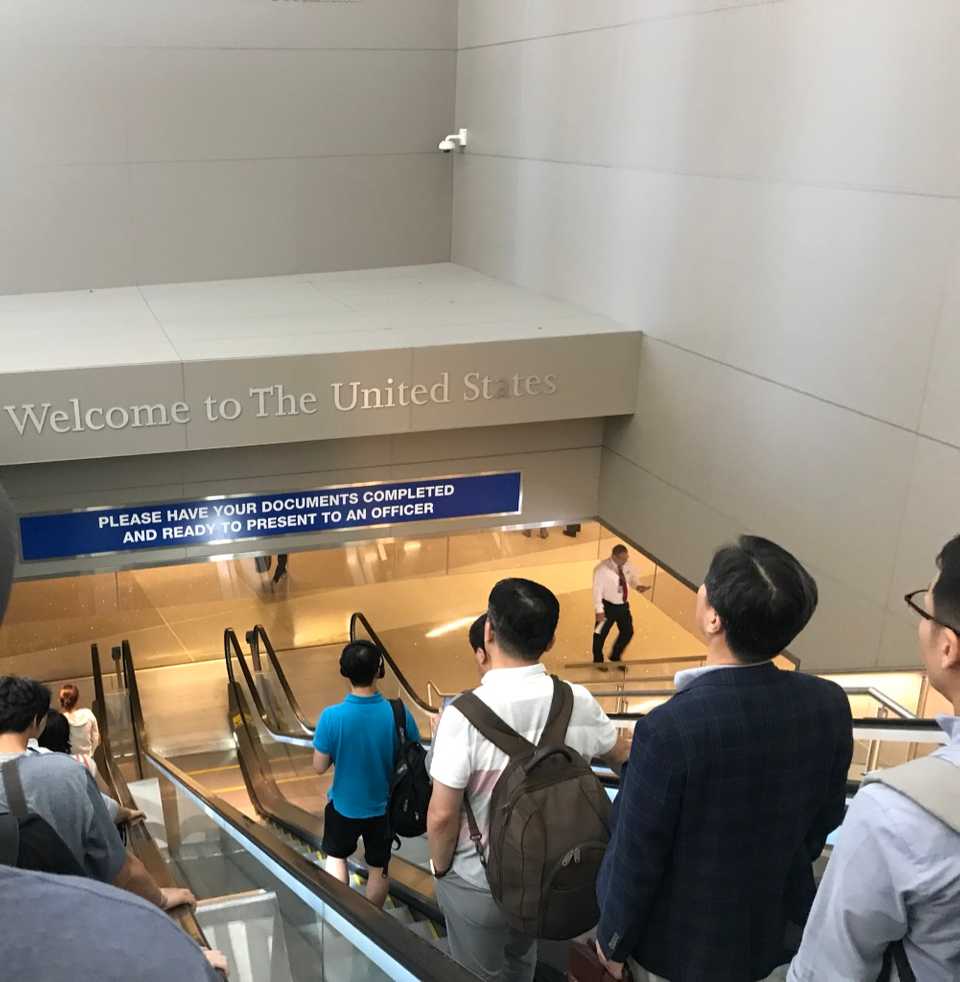 I had to transfer in Los Angeles before flying to Salt Lake City. First time I ever set my foot on U.S soil, I was so nervous and careful even when passing the security because all I thought of was they may shoot me simply for doing something that seemed “suspicious”. Yeah, seriously. Guess I was really terrified by the gunshot news. 🙃 People were all nice and patient, though. I didn’t run into any trouble.

I got to take a first look at the city. It was dry and sunny. There was not much to see but only some tropical trees. I don’t really like this kind of environment myself.

I didn’t know much about SLC except that it held 2002 Winter Olympics. I did do some research ahead of time but most of the impressions were about strange Mormons. In general it was still a mystery before my arrival. 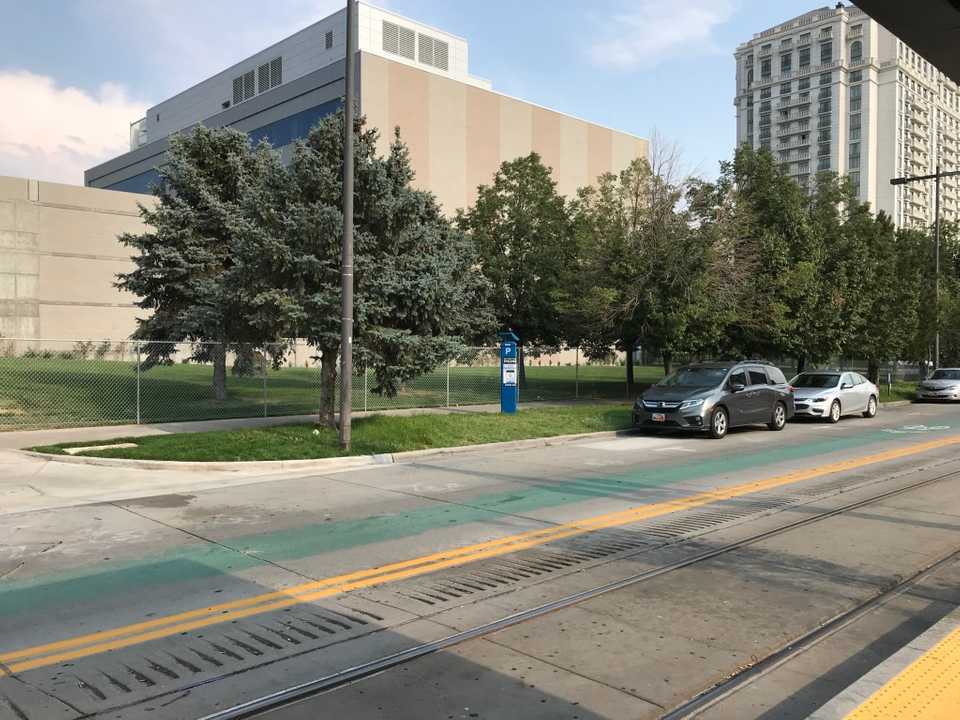 First impression: clean and empty! There are fewer cars and people. The city center is not big, making you hard to believe it’s the state capital. You only get buses and trains (they are called Trax there) for public transportation. It’s not so convenient as in China but Americans all have cars which makes public transportations less important in a wild west city. 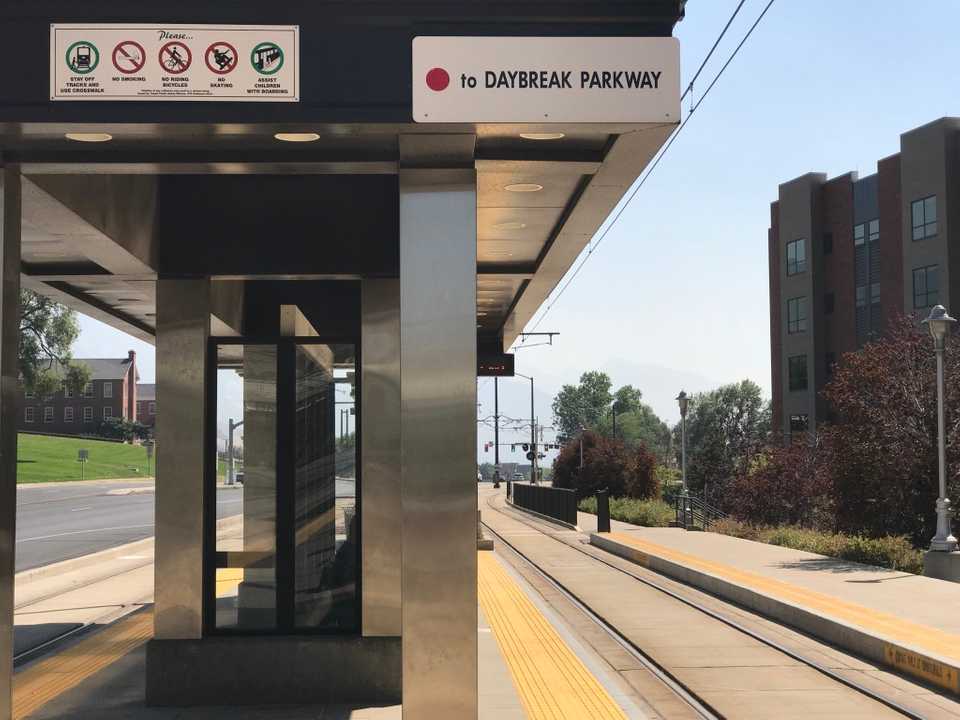 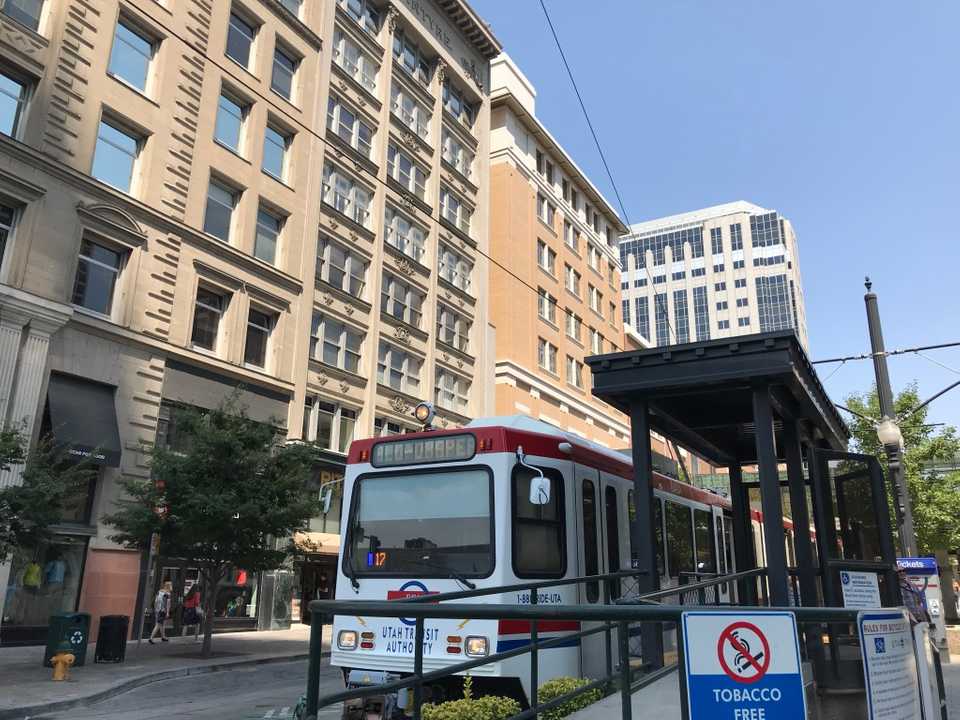 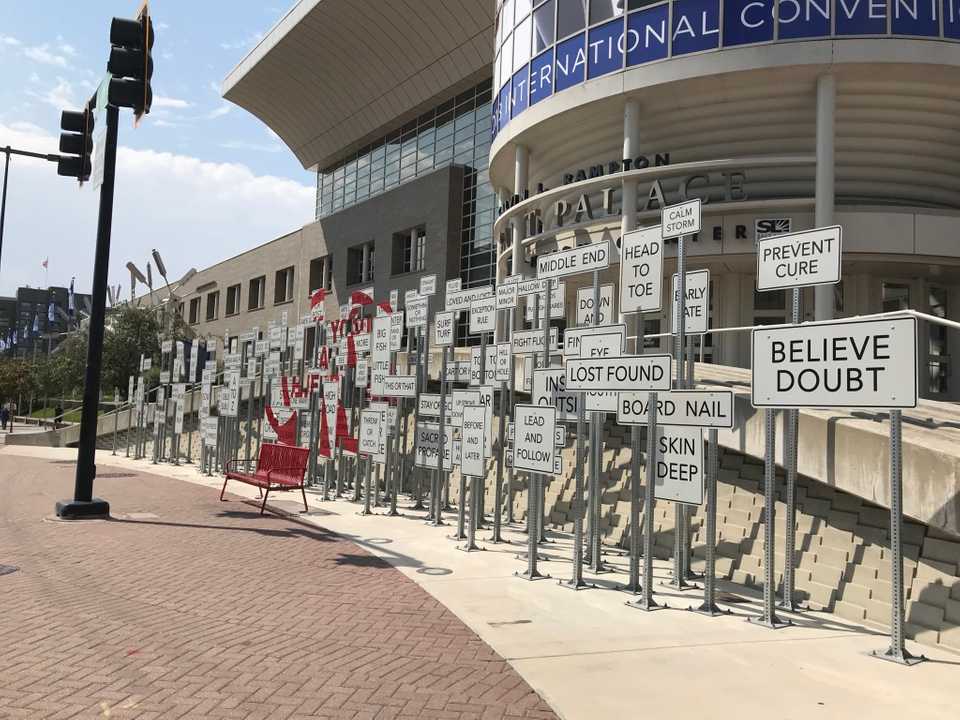 University of Utah campus shares the same quality with the city. It’s on the east side of the city and 30 minute ride far from it. 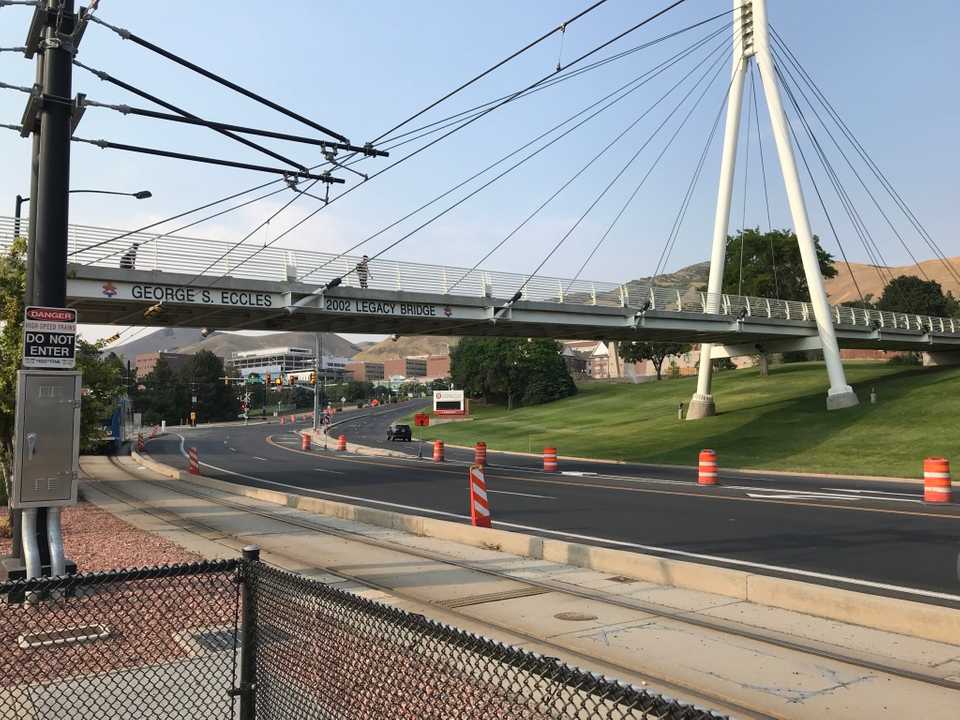 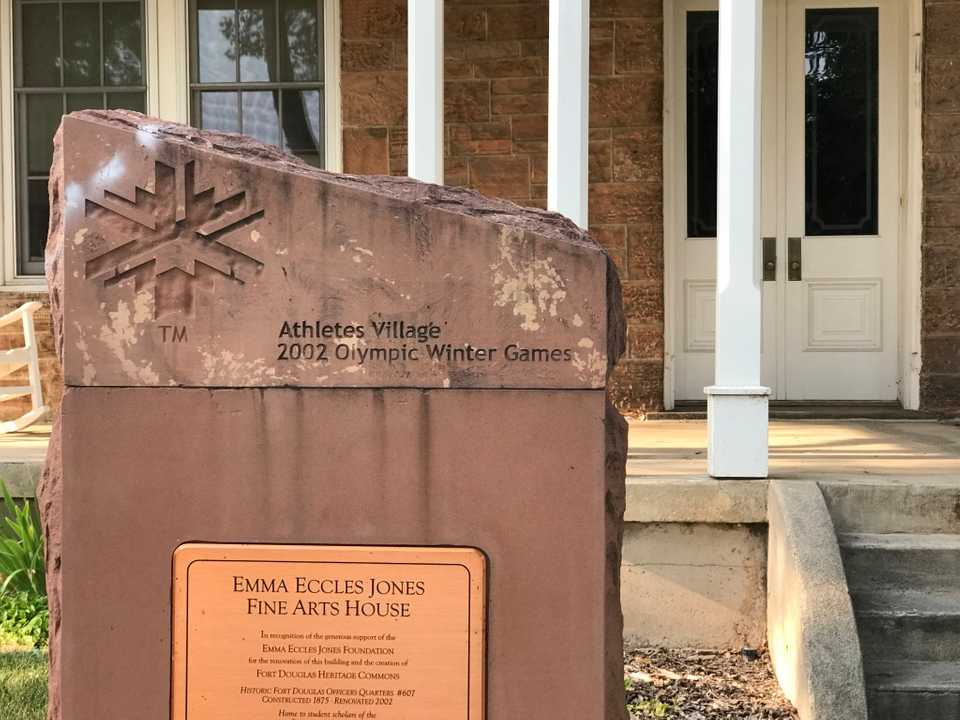 Large area of the campus was used for 2002 Olympics and also built as a result of it. I could see the buildings on campus were all pretty new and fresh. You cannot really sense their age unless you take a look at those bronze boards near the entrances with building dates branded on. 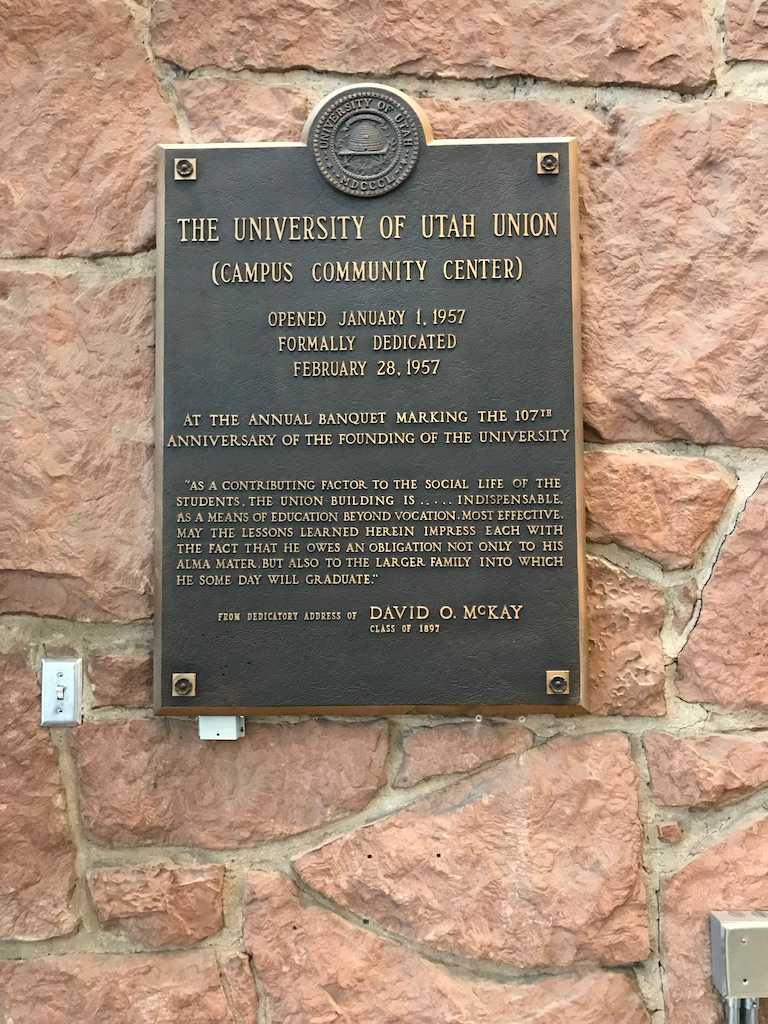 Exchange students are required to live on campus. This was really nice and I didn’t have to go through much trouble as some of my classmates in New York. The cost for apartment rooms, however, was indeed expensive even for the locals. I shared an apartment with two other roommates. We had a living room, a kitchen, two bathrooms and each one’s own room. It was quite a nice setting. 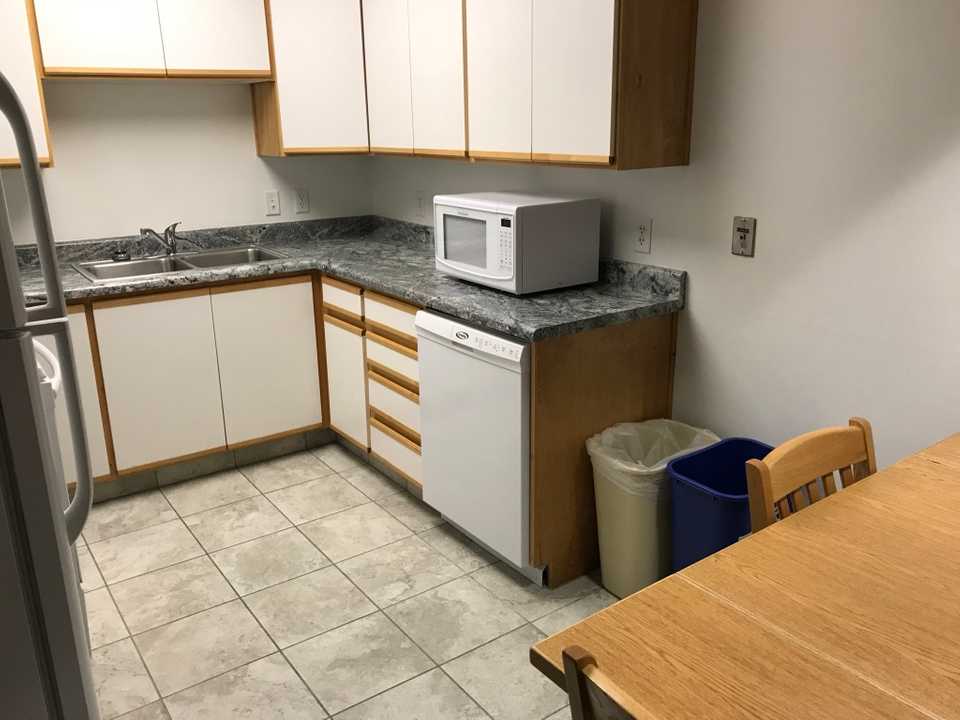 It would be much cheaper if people can make meals themselves in the United States. So a kitchen can be very useful. We got a fridge, a microwave and ovens… Everything! But my roommates seemed to only be able to cook instant noodles. 😂 Also, it was way better to have one’s own room both for study and entertainment. I didn’t have to worry about being disturbed by night owls or early birds. 😋

One thing that was worth mentioning was the dryer. It is soooo nice to have one at home. Clothes come out dry, fluffy and warm, saving you lots of time to hang them up. Speaking of this, we can use all the washing machines and dryers for free!

We also had RAs (Residence Assistant or Administrator?) to help out around and organize community events. Though I did not find many to be interested (or at least myself :p), their ideas were generally simple and educating. 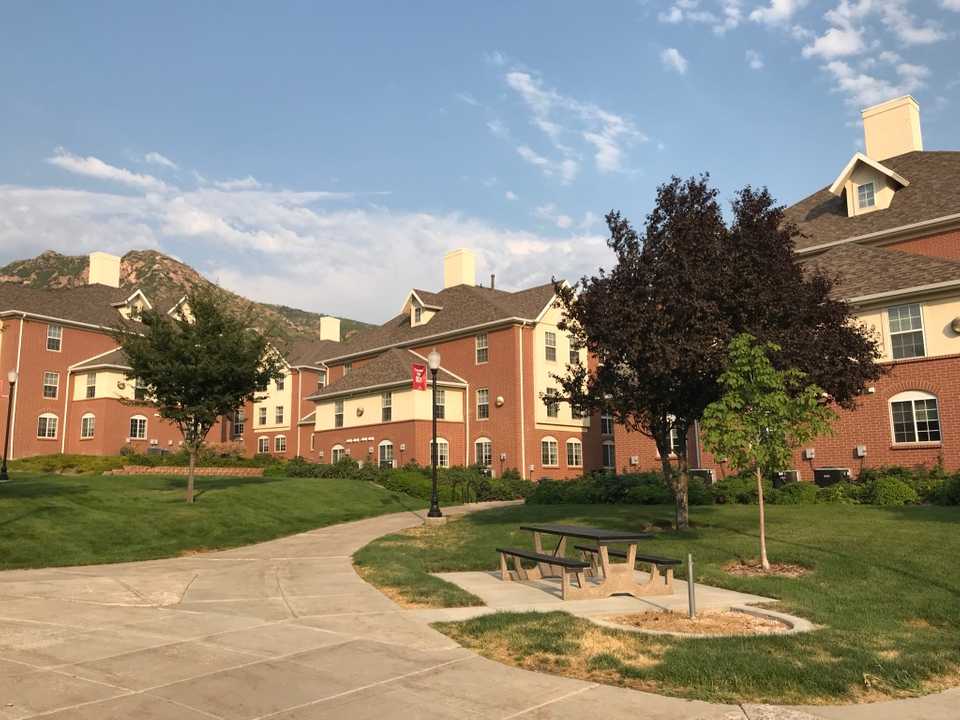 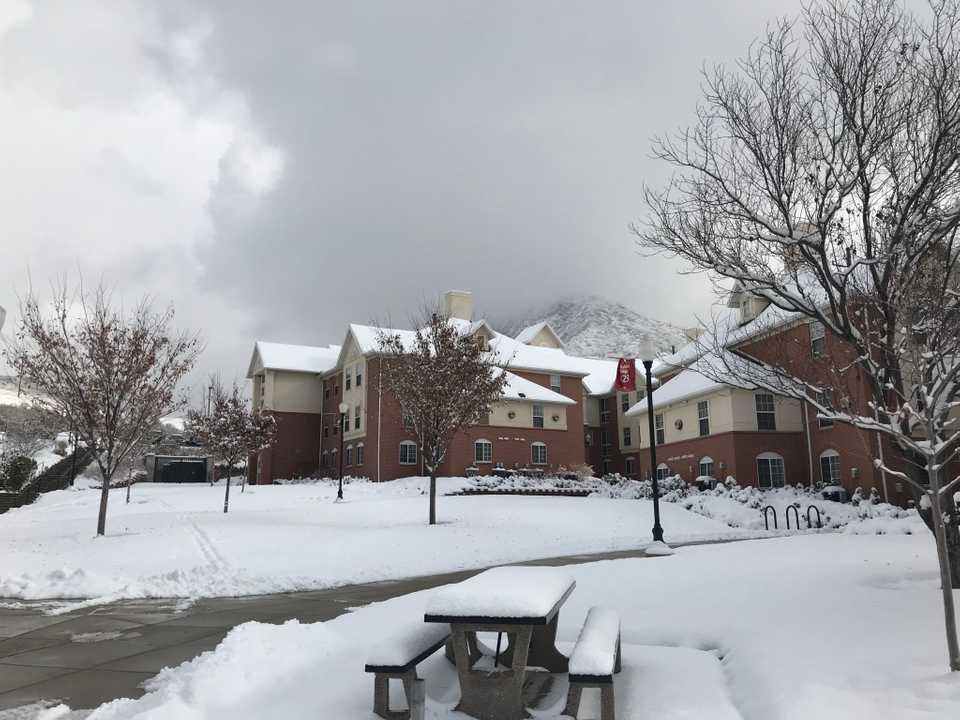 The biggest difference for a foreigner in the U.S. to sense would probably be the prices. A bottled coke is generally $1.75, which is almost 12.25 yuan and 3.5 times of its price in China (3.5 yuan). So If you do not earn dollars yourself, daily goods can be too much to afford. However, those goods manufactured from modern and industrialized assembly lines are fairly cheap in America itself if not compared abroad.

Another significant point worth noticing is that almost every item you see in the supermarket is large or multi-packed that are so-called family packs. So indeed as people would say, cheaper stuff is much more tailered for big families, which you can barely see in China nowadays.

I got the Amazon Prime Student membership for free and thus had been using the benefits a lot. Prime members have access to two-day shippings which is almost standard in China (you do not need any membership to enjoy the priviledge). The service, however, was way better. I cannot count the times when I asked Amazon to get me a refund or cancellation, and they just did it, fast, responsive and willingly. I also tried Amazon’s new Prime Now from the Whole Food they bought. It provides same-day shippings with a high bar of prices to get it for free, though. Goods from Whole Food were good but expensive, not something normal families can afford, I guess.

The last but not foremost thing is Black Friday! I did not go out to join the crowds, but I did spend a lot money online. Discounts were huge. Amazon processed refund or return requests efficiently during the Christmas season. On the contrary, you always need to wait until the shopping season to end in order to get these issues taken care of in China. 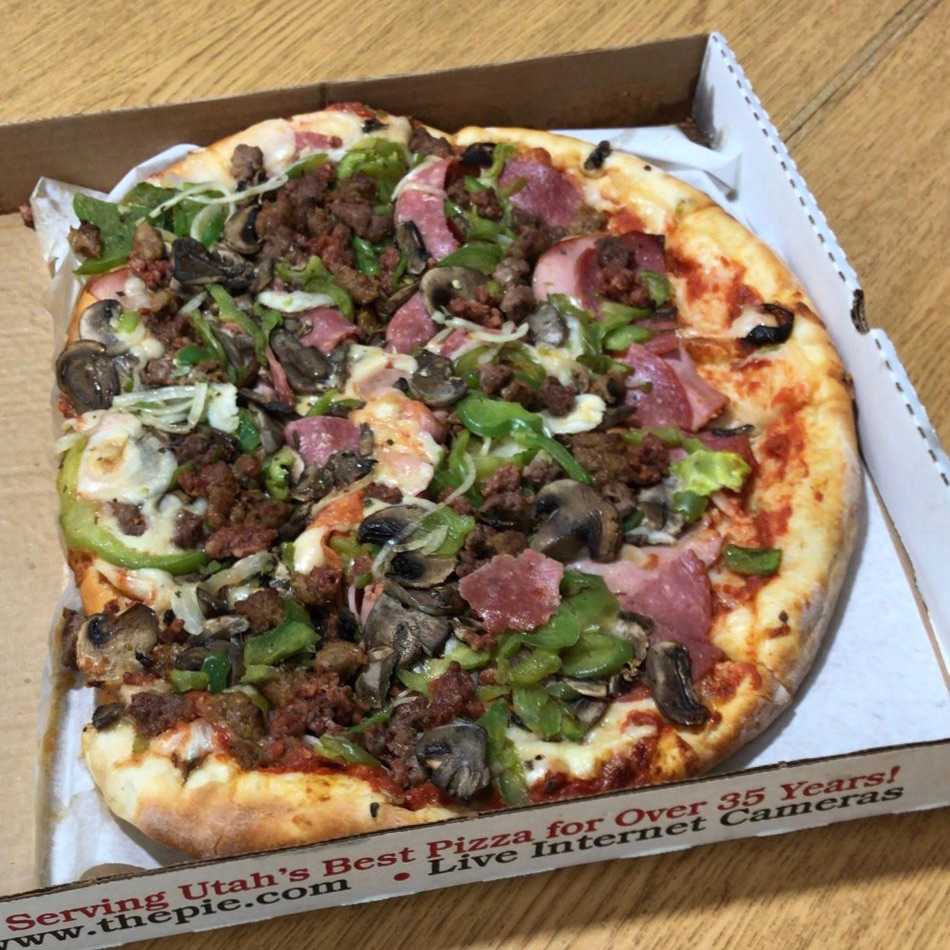 I would say the United States is the desert of food. You cannot really enjoy the food unless going to someplace expensive. This may sound arbitrary but it is what I felt. Burgers, pasta, pizza, sweets and ice cream. They are common American things to eat.

At first, I was excited to eat at the buffet place near the dorms. They have everthing listed above. 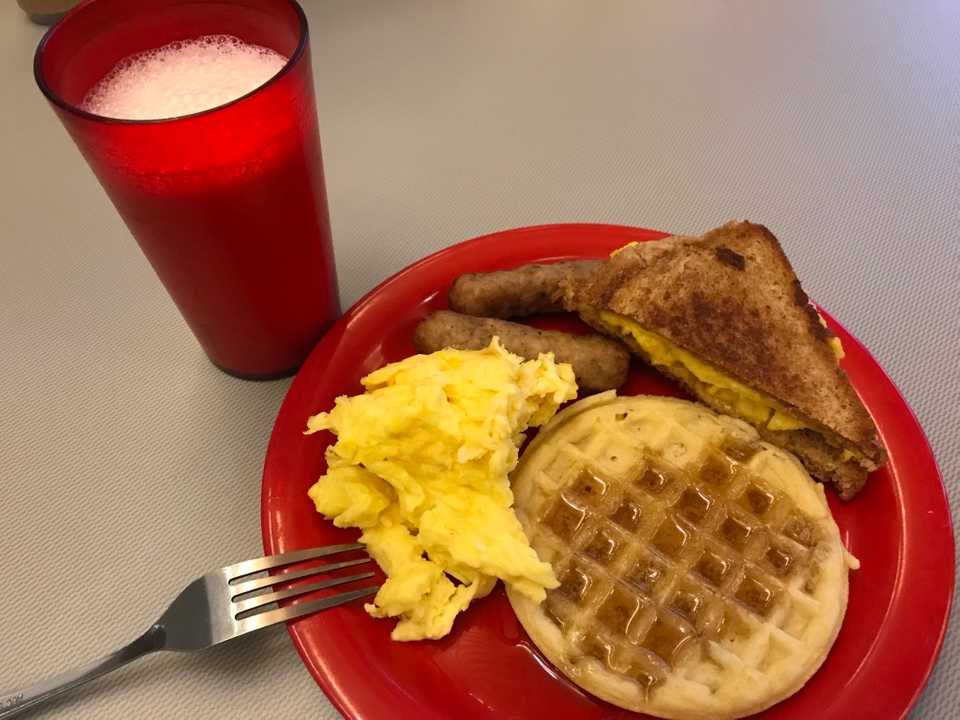 But I really had nothing else to choose and became bored. So if you are someone from outside the States, you’d better cook yourself. 😒

Apart from dining near the dorms, we could also choose to go to some fast food restaurant at school. I still remembered the first time I have ever bought a bagle. I was completely confused when they asked which kind of bagle (the bread) to choose, since I cannot understand a word about bagles. It tasted good, but the price was too much to match the taste. 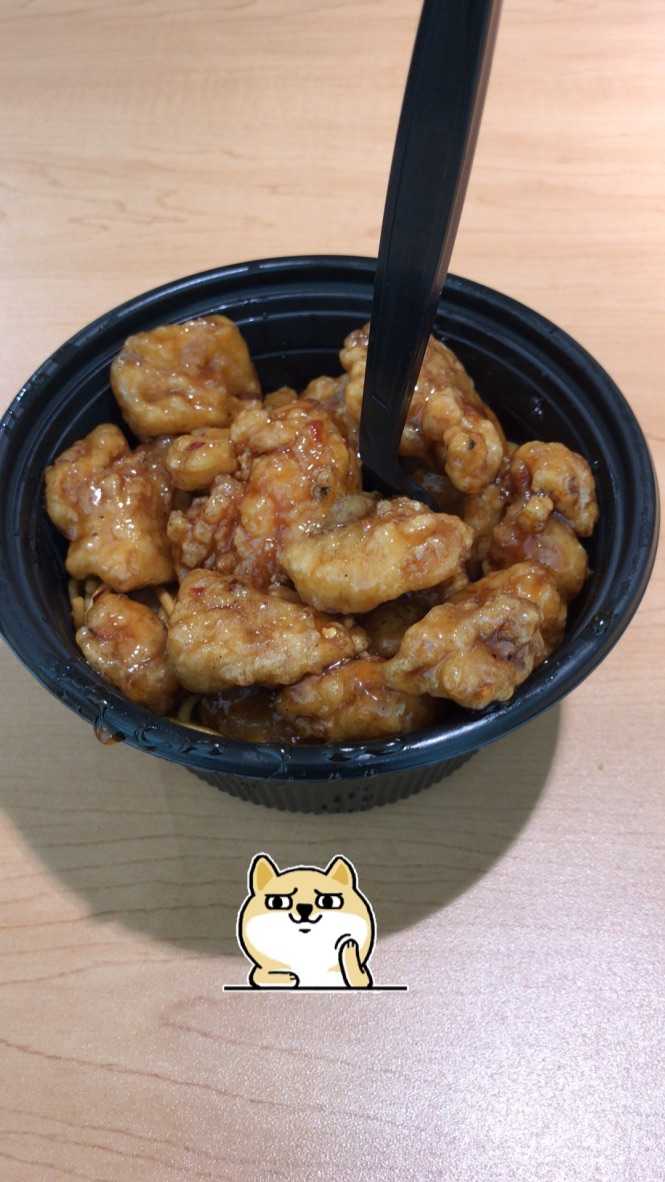 One restaurant I like best, though, is Panda Express! Many would say it’s not real Chinese cuisines. It’s true. Something like Orange Chicken made me want to vomit immediately because it smelled so sour. I like Kung Pao Chicken! It’s spicy and juicy!

The general price for a bowl of Panda Express is around 9inUtah.Kindofexpensiveforme.ButIlaterfoundoutyoualsoneedtospendaround9 for one McDonald’s meal. I guess eating out would not be a viable option if you want to save money.

Speaking of McDonald’s, I have to mention Starbucks as well. One interesting aspect about Starbucks is the price of a coffee is almost the same between China and the States. $6 and 40 yuan. In comparison, one McDonald’s meal is less than $9 * 7 = 63 yuan in China. You can see how Starbucks earns money in China, without any price localizing. 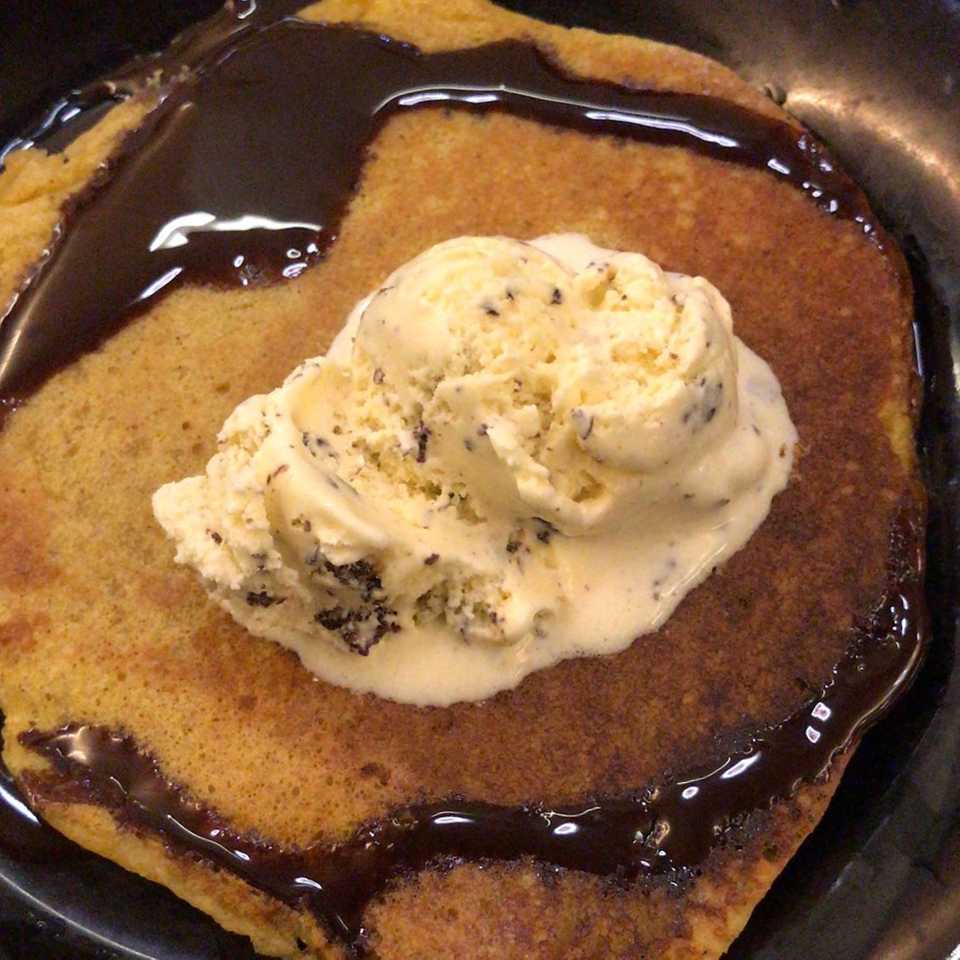